During the evening on Monday 3 February, Alliance Airlines recently delivered Fokker F-100 jet VH-UQG was noted making its first visit into Central Queensland (and first commercial flight) since its delivery to Brisbane around a fortnight ago, completing the weekly UTY4078/4079 Fly-in Fly-out (FIFO) charter flight into Emerald Airport from and back to Brisbane via the Sunshine Coast.  It was photographed below departing Brisbane Airport. 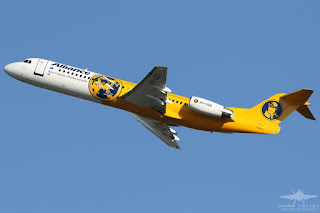 As can be seen in these pictures, VH-UQG has been painted into a stunning livery by Lila Design in Tilburg, The Netherlands (EU), which honours adventurous Australian aviator Sir Charles Kingsford-Smith.

The VH-UQG registration marking was the registration for Kingsford-Smith’s Avro 616 Avian ‘Southern Cross Minor’ and was assigned to the Fokker aircraft by chance.

VH-UQG celebrates the early years of pioneering aviation and should soon be visiting other major cities and regional towns in CQ and around Australia.

UPDATE!  VH-UQG was back at Emerald Airport early on Tuesday 4 February, again operating the closed FIFO charter flight from and back to Brisbane via the Sunshine Coast but as UTY4072/4073.

Sincere thanks to Brisbane-based plane spotter Simon C for allowing us to share his great photo of VH-UQG!  I personally look forward to seeing it myself!