Noted at Moranbah Airport on Thursday 15 July was QantasLink Dash-8-Q300 VH-TQH arriving on a scheduled service from Brisbane. In the video below you will also see local aircraft including Cessna 172 VH-ELE, Cessna 150 VH-PKU, and a Jabiru parked.

VH-TQH is also pictured parked on the Moranbah Airport apron just after pulling up. 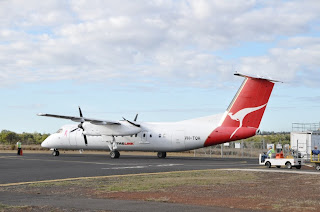 As previously posted, QantasLink operates 11 return services to Moranbah from Brisbane, with 2 of these being FIFO charters for the local mines.
Posted by Damian F at 6:26 PM