With the monopoly that QantasLink has on this service, and the usually high load factor, I was surprised to get reasonably priced fares booked only a couple of weeks prior to the flights.  QantasLink now operate between 4-5 services on this run each weekday, and 2-3 on the weekend. 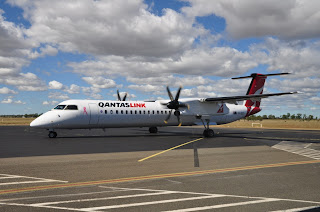 Checked in at the new terminal counters at Emerald Airport – very fast with no other pax waiting – conveyor belt to the baggage area is loud though – had to walk past the construction zone to the old terminal waiting area – the new terminal waiting area is under construction and will feature security screening – there will also be a state-of-the-art QantasLink lounge for Qantas Club and Platinum and Gold Frequent Flyer members.

Flight to Brisbane left about 20 minutes late and was smooth and uneventful – full flight but plenty of room (I'm over 6ft tall and not skinny) - these aircraft are surprisingly roomy – light refreshments were served about 20 minutes into the flight, followed by tea and coffee – arrived in Brisbane about 15 minutes late – managed to make up some time due to favourable tail-winds at the cruise of 25000ft.  In all, great service and another great flight from QantasLink.

I used the Quick Check-in facilities at Brisbane Airport – was assigned a window near the rear of the plane – checked the seat map and there were no other seats available – a full flight??

Boarded through the downstairs waiting area in the Qantas Domestic Terminal at Brisbane Airport – it was busy at this time with three other QantasLink flights and a Brindabella Airlines flight all departing about the same time – and then via the tarmac.  Flight wasn’t full with just about every isle seat vacant – yet the check-in kiosk had the marked at ‘unavailable’??

Flight left on time but due to headwinds at cruising level 16000ft arrived into Emerald about 10 minutes late – light refreshments were served about 20 minutes after take off – followed by tea and coffee and the complimentary beer and wine service as happens on all Qantas and QantasLink flights after 4pm.  Great service and a great flight with plenty of room again on QantasLink.
Posted by Damian F at 4:23 PM