Rockhampton Airport to Re-open This Week

Three weeks after floodwaters drowned its runways, Rockhampton's airport will reopen this week.

The last major flight took off on New Year's Day just days before the Fitzroy River was due to peak.

Rockhampton Airport says on its website that all major runway repairs and critical perimeter fencing works have now been completed, with line-marking of the runways and taxiways will be complete on the weekend. 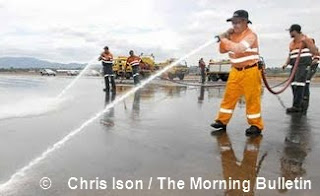 Unfortunately though, due to extensive flood damage, the secondary runway (04/22) will remain closed for an extended period, but this will not affect the return to normal airline operations.

The Airport electrical services are in the final phase of runway lighting system repairs and calibration.

QantasLink has announced that it will resume services linking Rockhampton to Brisbane, Cairns, Gladstone, Mackay and Townsville. There will be a reduced schedule over the first two days of the week; however QantasLink will operate their larger and faster 74-seat Dash-8-Q400 aircraft on all sectors to provide as many seats as possible.

While QantasLink and Virgin Blue planes will operate this week, Tiger Airways has suspended all flights to Rockhampton until March 29.