Spotted on the ground at Rockhampton Airport early last Saturday 9 April was Dash-8-100 VH-QQA. This aircraft is owned by Skytrans Airlines in Cairns, but was operating an Air Cruising Australia Charter. The aircraft carries "Bill Peach Journeys" titles on the fin.

UPDATE!! We thank Don W in Rockhampton who has supplied the following photo from last Saturday. 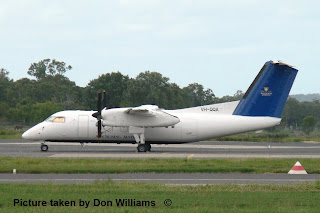 VH-QQA departed in the afternoon to the Sunshine Coast as "Cruiser 450". Until recently, this aircraft was operated in Western Australia by Maroomba Airlines.

Then a bit later last Saturday afternoon, a pair of what was believed to be Royal New Zealand Air Force (RNZAF) Beech B200 King Air aircraft arrived into Rockhampton Airport. Local spotters heard the callsigns "KIWI 879" and "KIWI 905" arrive into the airport, however, they had apparently departed to Cairns before any photos could be taken.
Posted by Damian F at 7:17 PM