The sole survivor of the fatal helicopter crash at Double Mountain, about 90km north of Rockhampton on Thursday 8 September, remains in a stable condition in hospital. 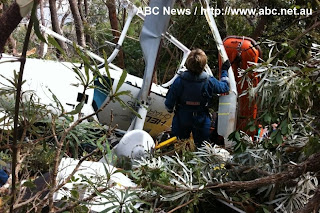 Two men were killed when the chopper, Aerospatiale AS350 Squirrel VH-RDU, of Heli-Charters in Cairns, crashed in dense bushland, around midday on Thursday.

The only survivor, who suffered serious injuries, remains in a stable condition at Rockhampton Base Hospital after being air-lifted by rescue crews late Thursday.

Rescue helicopters carrying doctors and paramedics from Rockhampton and Mackay flew to the site after the pilot had contacted police at midday by radio shortly before crashing.

The RACQ Capricorn Helicopter Rescue chopper and RACQ Central Queensland Rescue (CQ Rescue) helicopter were both tasked to the site of the helicopter crash. A spokesperson for CQ Rescue said rescuers were amazed at the survivor's condition, considering the horrendous scene that they were greeted with.

The CQ Rescue Bell 412EP VH-EPK is pictured below flying to the crash site on Friday 9 September. 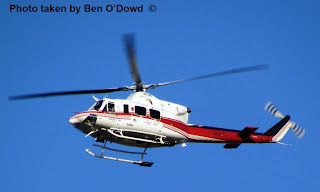 The difficult terrain caused problems for the rescuers. It is believed that the chopper landed upside down in heavily wooded bushland at the base of a steep embankment on Double Mountain in the Shoalwater Bay Military Training Area.

The Australian Transport Safety Bureau has taken control of the crash site, and police are preparing a report for the Coroner.
Posted by Damian F at 7:53 PM