For those lucky enough to be at the right place at the right time in Central Queensland this week, would have seen a globe-trotting Dynamic WT9 Ultralight passing through on an around the world adventure.

The aircraft, registered F-JSUB, arrived into Longreach Airport on Sunday 6 November, before departing the next day for Far North Queensland. After passing through Lizard Island, Cooktown, and Hamilton Island, the WT9 arrived into the Whitsunday Airport at Shute Harbour on Tuesday 8 November. 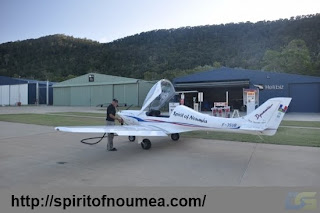 After staying for the night, it departed to the South via Rockhampton.

The Ultralight is being flown by two pilots, who are following in the footsteps of Charles de Verneilh who in 1932 had made the first Paris-Noumea flight with a three-engine airplane.

More information and pictures can be found on their website: http://spiritofnoumea.com/
Posted by Damian F at 8:25 PM