QantasLink to Operate a Boeing B717 Jet Service to Gladstone Airport

QantasLink is on the verge of a new era in Gladstone, as it plans to fly Boeing B717-200 jet aircraft to the region in the new year.

The airline has told The Gladstone Observer newspaper the move will substantially boost the number of passengers it can transport each week.

The move would be a big step for Gladstone's travelling public, since QantasLink has thus far relied on its Dash-8-Q400 turboprop aircraft. The Boeing B717-200 has greater capacity than the Dash-8-Q400.

The Boeing B717-200 is a twin-engine, single-aisle jet airliner, developed for the 100-seat market. Cobham Aviation Australia (formerly National Jet Systems Australia) operate a fleet of 11 Boeing B717-200s for QantasLink throughout the Northern and Western parts of Australia. B717-23S VH-NXE is pictured on approach to Cairns Airport late last year. 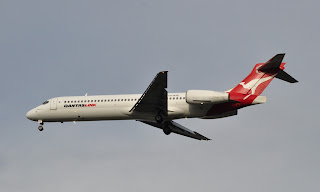 A Qantas group executive flew to Gladstone recently for a meeting with key stakeholders, to outline the airline's vision for Gladstone.

He told The Gladstone Observer that Qantas is going to be substantially increasing capacity into Gladstone by operating jets from the first quarter of next year.

A more formal and detailed announcement will be made in coming weeks.

Since Virgin Australia entered the Gladstone market two months ago, travellers have been hoping competition would lower prices. With this increase in capacity, prices could reduce even more.
Posted by Damian F at 8:42 AM