As noted in previous Blog Posts, Virgin Australia were repainting all their aircraft that, until recently, carried special promotional colour schemes to advertise the Australian Football League (AFL). The aircraft - Boeing B737-800s VH-VUY and VH-VUZ, and Embraer E-190 VH-ZPQ - have now been repainted into the new Virgin Australia livery.

Don W was at Rockhampton Airport early on Tuesday 15 November, and managed to catch E-190 VH-ZPQ looking sharp in its new colour scheme as it departed to Brisbane as DJ1232. 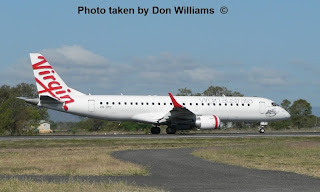 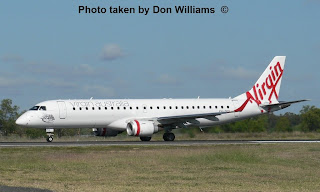 Later in the day, VH-ZPQ also popped into Mackay Airport.
Posted by Damian F at 8:53 AM