The offical opening of the lounge follows the recent introduction of QantasLink's (Cobham Aviation-operated) Boeing B717-200 jet service to Gladstone from Brisbane. 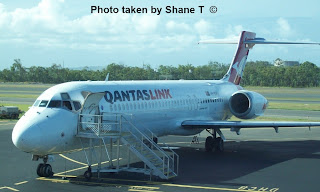 While photographing the first B717-200 service recently, Shane T noted that the Qantas Regional Lounge was already open for business. He reports that it has plenty of facilities that provide travellers with refreshments before take-off, as well as other features such as meeting areas. 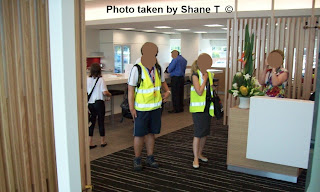 The opening was attended by many of the city's dignitaries including representatives of the Gladstone Regional Council, state and federal politics, as well as key corporate players.

The opening was overshadowed however, by the stranding of several Rockhampton-bound QantasLink passengers at Gladstone Airport the previous evening. Due to the adverse weather conditions, the QantasLink Dash-8 was unable to land at Rockhampton Airport, and instead landed at Gladstone, where passengers were forced to 'camp' in the Gladstone Airport terminal due to the city's lack of available accommodation. Full report can found on the Blog (HERE).
Posted by Damian F at 8:00 PM