During the afternoon on Friday 28 February, Royal Australian Air Force (RAAF) Airbus A330-200 / KC-30A Multi Role Tanker Transport (MRTT) A39-007 was spotted as it climbed out after completing a missed approach at Rockhampton Airport.  It was flying as "Dragon 53". 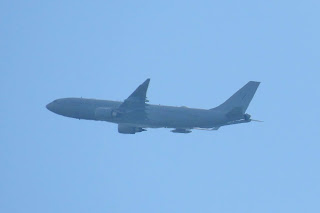 A39-007 initially flew up from RAAF Base Amberley via an inland route to overhead Emerald before it then turned towards Rockhampton.  After completing the airwork at Rockhampton Airport, A39-007 returned to Amberley.

As mentioned previously, A39-007 is the most recently delivered of the seven KC-30A's of the RAAF's 33 Squadron based at Amberley.  A39-007 was delivered in May 2019 and previously operated with Qantas Airways as VH-EBI.

A30-006 looked to fly up from RAAF Base Williamtown near Newcastle and later depart to complete more airwork at the Gold Coast before later returning to Williamtown.  A30-003 was heard to be flying as "Wedgetail 04".