On Monday 10 January, several Fly-in Fly-out (FIFO) charter flights were noted around the region, including three Link Airways (Corporate Air / Vee H Aviation) SAAB 340B turboprops which all flew up from Brisbane and into various Central Queensland Airports.
VH-VEP was noted arriving into Emerald Airport from Brisbane before I was then able to photograph it soon after it arrived into my local Clermont Aerodrome. 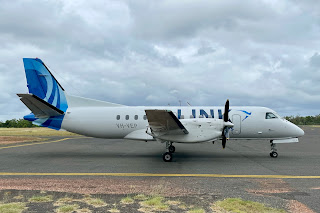 VH-VEP then returned to Brisbane.
About the same time, VH-VEF flew up to Mackay Airport and back to Brisbane.  And VH-VEM flew to Theodore Aerodrome before later flying back to Brisbane.
Of interest,  Link Airways (Corporate Air  / Vee H Aviation) Metro 23 VH-VEU completed the airline's Regular Passenger Transport (RPT) service into Biloela / Thangool Airport, arriving from and later departing back to Brisbane.
Meanwhile, also on Monday 10 January, Skytrans Airlines Dash-8-100 VH-QQC arrived into Rockhampton Airport from Brisbane as SKP783 before it then completed a Fly-in Fly-out (FIFO) charter run to the Labona Station Airstrip within Adani Australia's (Bravus Mining & Resources) Carmichael Coal Mine site and back as SKP771/2.
Fellow Skytrans Dash-8-100 VH-QQG completed a FIFO charter run to Labona from and back to Townsville as SKP761/2.  And Skytrans Dash-8-100 VH-QQI flew the coast run from Cairns to Proserpine (Whitsunday Coast) and Rockhampton Airports and back as SKP81/2.
While Seair Pacific / Istlecote Cessna 208 Caravan VH-TQW was noted flying up from Hervey Bay (Fraser Coast) and Maryborough Airports to Wanella Station (near Coppabella) on a closed FIFO charter flight before flying back down to Hervey Bay Airport.
Finally, also on Monday 10 January, Poolhurst Aviation Air Charter Services Pilatus PC-24 jet VH-VTF was noted visiting Hamilton Island Airport from its Archerfield base.
M. D. H. P/L (Cloncurry) Pilatus PC-12/47E VH-UJM flew up from the Rolleston area to also visit Hamilton Island Airport before then flying down to Archerfield.  It looked to fly up from Archerfield on Sunday 9 January.
Victoria-based  Cirrus SR22 VH-MHA departed the Whitsunday Airport at Shute Harbour for Caloundra.  It had arrived on New Year's Eve on Friday 31 December.
Gulf Aircraft (SGPG Air) Cessna 680 Citation Sovereign bizjet VH-PYN was spotted at Mackay Airport.  It looked to arrive from Brisbane and then depart to Cairns.  VH-PYN later flew to the Gold Coast and back to Brisbane. 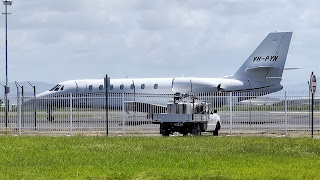 While Piper PA-31-350 VH-OCF popped into Mackay Airport from its Cairns base.  Plus ZephAir Australia - Aircraft Charters Piper PA-31 Navajo VH-AYT completed a missed approach at Mackay Airport on a flight down from and back to its Townsville base.
And McDermott Aviation / Heli-Lift Australia Eurocopter AS365N3 Dauphin helicopter N365JA was spotted visiting Maryborough Airport. 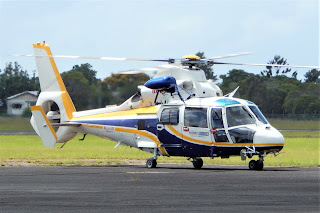 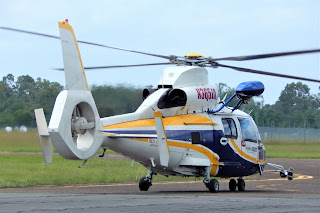 It is one of many private local and State-based helicopters that are assisting with the current flooding crisis hitting the town and other parts of the Wide Bay / Burnett region.
Photos taken by 'JM' and David Geck  ©
Posted by Damian F at 9:34 PM