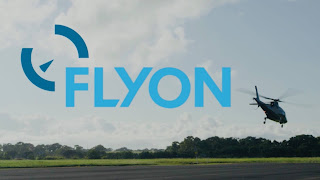 The Mackay Airport-based Flyon Helicopters has recently undergone some changes to their fleet with their Agusta A109 helicopters.  A109E VH-ZCF - which has previously operated for the RACQ LifeFlight Rescue Helicopter Service - returned to Mackay Airport after being repainted at Melbourne (Essendon) over the previous couple of months.


VH-ZCF was noted returning to Mackay Airport on Saturday 8 September from Redcliffe, Hervey Bay (Fraser Coast) and Gladstone Airports.  It had left Essendon the previous day.  It looked to complete its first flight back with Flyon Helicopters on Sunday 9 September when it completed a flight from Mackay Airport to the Blossom Banks and back.

Another Agusta A109E, in the form of VH-RUA, was noted departing Mackay Airport on Saturday 29 September for Gladstone Airport and Redcliffe.  It is assumed that it has entered the maintenance hangar at Redcliffe.

While after arriving in July and being operated by Flyon Helicopters on their flights to the Blossom Banks and back to Mackay Airport, Aviation Utilities (New South Wales) Agusta A109S helicopter VH-XPB was noted heading South from Mackay Airport to the Gold Coast via Gladstone Airport and the Sunshine Coast on Saturday 6 October.  It continued to Bankstown the next day.


One final Agusta A109E, in the form of VH-XUM, continues to operate for Flyon Helicopters out of Mackay Airport, currently being joined by VH-ZCF - as mentioned above.

We've reported previously on the launch of operations by locally-based Flyon Helicopters out of Mackay Airport predominately on Marine Pilot transfer flights for the compulsory area of Hydrographers Passage, off Mackay.  They also offer additional helicopter charter services including corporate and private charter, aerial filming and photography, mining support, including crew and employee transfers.  All Flyon activities are carried out under the AOC of Jayrow Helicopters.

Check out Flyon Helicopters Facebook page for more information and some great photos of their helicopters in action - https://www.facebook.com/FlyonHelicopters/
Posted by Damian F at 7:46 PM