Mackay Airport's $10 million upgrade has commenced with work on the overlay of the main runway reportedly begining this week. The majority of the runway works will take place during the night to avoid disruptions to daytime operations.

Mackay Airport management states that "the project will ensure the ongoing integrity of the runway and its ability to meet the demands of the growing number of aircraft movements at Mackay Airport".

The Airport upgrade will also feature a $2 million remodelling of the terminal, creating space for various new shops, including added cafes and bars along with a souvenir shop and newsagency. The new terminal design (below) also means the central concourse will become part of a much larger departure lounge and the security screening point will be relocated to the front of the central concourse. Additionally, the airport’s observation area will remain a feature of the redeveloped terminal. 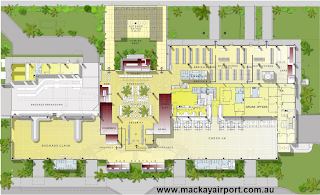 The upgrade is the first major upgrade to the airport since the terminal was refurbished in 2004, and is the first major project of the airport’s new owners since they purchased it on a 99-year lease from the State Government. The project is staged to ensure minimal disruption for airport users and it is expected it will be completed by the end of 2010.
Posted by Damian F at 8:03 PM