An Aero Commander and an ATR at Gladstone Airport

Aero Commnader 500-S, VH-UJM, is becoming a ‘resident’ at Gladstone Airport.  The aircraft noted on Tuesday 15 November was built in 1973 and is currently owned and operated by General Aviation Maintenance (GAM AIR Pty Ltd) in Melbourne. This, and other GAM operated Aero Commanders move around Central Queensland airports, like Rockhampton and Mackay, and are predominately used for general cargo work and newspaper deliveries around the region.

Virgin Australia ATR 72-500 then arrived into Gladstone Airport from Brisbane on Tuesday 15 November, and made some interesting observations on its post engine shutdown procedures.  This afternoon's service was operated by VH-FVH, and as most have noticed about the ATR, passengers get on and off the plane using the rear door, which is obviously rare for a passenger plane. 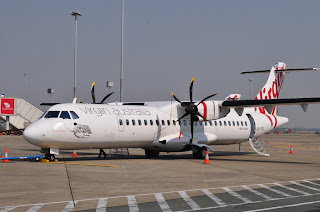 The front door is used to load bags and other cargo. A tail stand is also generally installed when passengers are boarding or disembarking in the case the nose lifts off the ground, which is seemingly common if this type of aircraft is loaded or unloaded incorrectly.

The ATR also appeared to be attached to a mobile air-conditioning unit to maintain the comfort of the cabin. This turns out to be quite common as the ATR aircraft does not have an auxiliary power unit (APU) as normally equipped.

The APU is an option and would be placed in the cargo section of the aircraft. Most airlines around the world that operate the ATR normally equip their aircraft with a propeller brake (referred to as "Hotel Mode") that stops the propeller on the #2 (right) engine, allowing the turbine to run and provide air and power to the aircraft without the propeller spinning. The downside to the prop brake is improper usage; many airlines have burned these brakes up, and furthermore the companies have removed them from the aircraft entirely. This does however, eliminate the need for the added weight and expense of an APU and prop brake system.
Posted by Damian F at 11:32 PM