Yesterday I found out that sadly, a round-Australia charity flight that called into Rockhampton Airport in July has been cut short by a plane crash at the Kununurra Airport on Tuesday 8 November. 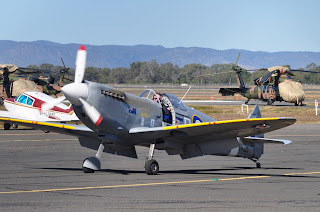 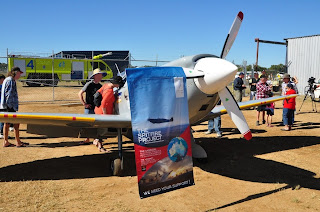 Brian Scoffell and his son Stewart, were about to fly from Kununurra to Truscott in the north of West Australia - the next leg of their trip around Australia in their quest to raise money for the Leukaemia Foundation - when their replica Spitfire MK-26B collapsed onto its undercarriage during its take-off run. A police spokesman said the wing, propeller and engine were damaged in the accident but the pair escaped injury. The picture below is from the ABC News website. 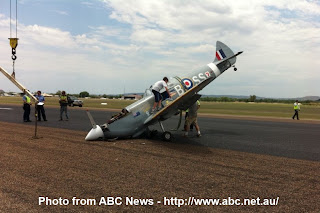 The good Samaritans were forced to give up their fundraising expedition and ship the plane back to their home in Willowbank, about 40km south-east of Brisbane. The Scoffells were not even half way through their five month adventure-they were still due to fly across the Nullarbor to Adelaide, Melbourne and Sydney before heading back to Brisbane.
Posted by Damian F at 7:58 AM