This month's Historic Spot takes a look back at the airline that gave rise to Alliance Airlines - Flight West Airlines.

Flight West Airlines was an Australian regional airline originally based in Brisbane that flew passenger services throughout regional Queensland mostly during the 1990's. 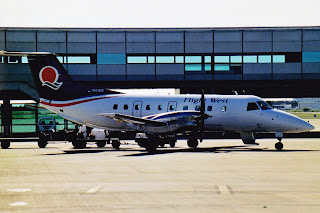 The airline was established in May 1987 by Sir Dennis Buchanan - a very well known and respected aviation figure particularly in Papua New Guinea - to operate subsidised passenger services to remote communities throughout regional Queensland mostly on Queensland Government contracts.

Initially the airline used Beech King Air aircraft on these services from a base in Brisbane.  VH-SKC is shown below at Brisbane Airport in 1998. 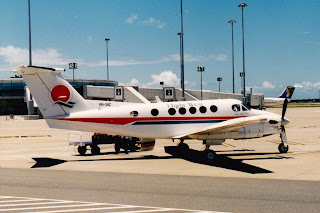 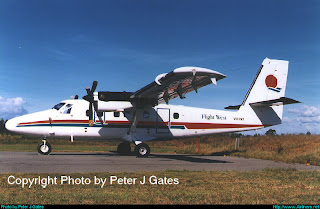 Flight West established a second base in Cairns - where EMB-110 Bandit VH-XFM in North Queensland Cowboys colours is pictured - and then eventually a third in Townsville.  Soon after, Flight West Airlines was operating the most extensive network of routes throughout regional Queensland and further, serving some 34 destinations. 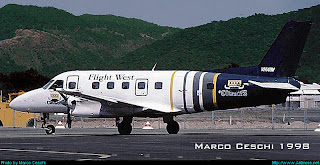 It served major cities and small regional communities throughout the state, plus communities on Cape York Peninsula and in the Torres Strait, major coastal cities and islands, and cities and towns in western Queensland - including Barcaldine, Blackwater, Bundaberg, Emerald, Gladstone, Longreach, Mackay, Proserpine, Rockhampton, and Roma in Central Queensland.

In the mid 1990s the Flight West fleet was expanded to include De Havilland Dash-8-100s and Embraer EMB 120ER Brasilias.  Dash-8-100 VH-XFT and Brasilias VH-XFV are shown in the airlines old colours at Brisbane in the late 1990s. 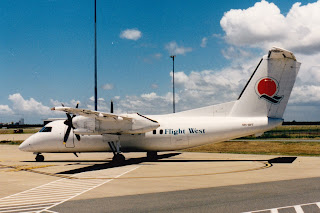 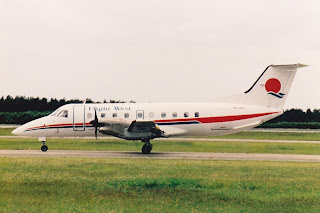 EMB-120 VH-XFQ is shown below at Brisbane Airport in 1998 in Flight West's new colours. 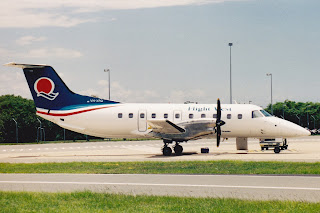 Flight West also continued to paint their aircraft in special promotional colour schemes as shown below on EMB-120 Brasilias VH-XFH (in Whitsundays 'Out of the Blue' Colours) and VH-FNQ (in North Queensland Cowboys Rugby League team colours). 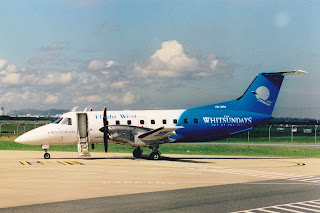 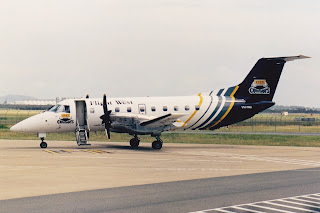 By this time, the airline had disposed of the Twin Otters and Bandierantes. 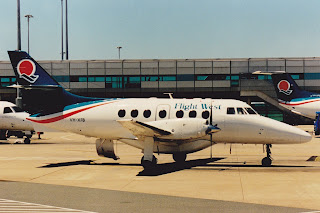 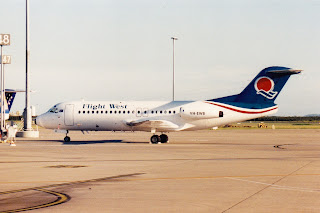 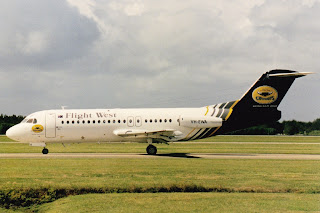 This was followed shortly after by two newer Fokker F-100s - VH-FWH (pictured below at Brisbane in 1999) and VH-FWI. 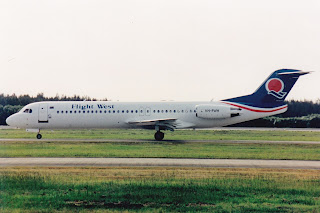 The Fokker jets were used on services linking Norfolk Island with Brisbane and Sydney, and between Brisbane, Townsville, Gladstone, Longreach and Emerald.  In fact, Flight West F-28 VH-EWB was the first ever jet aircraft to land at the upgraded Emerald Airport in 1998.


Flight West was affiliated with (but independent of) Ansett Australia Airlines, and in Brisbane, operated from the Ansett Domestic terminal.

On 16 June 2001 the airline was placed into voluntary liquidation and PricewaterhouseCoopers was appointed to manage the company.  F-28 VH-EWA - devoid of any colour scheme - was photographed at Brisbane during this time. 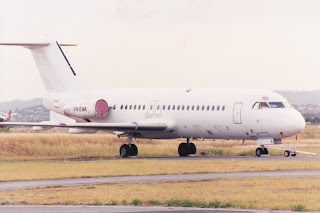 Ansett announced on 27 June 2001 that they would lease eight of the company's aircraft and restart 16 routes effective immediately.  Newer EMB-120 Brasilia VH-TLZ was one such aircraft that was utilised - devoid of any Flight West titles. 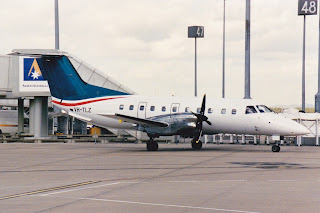 After extensive restructuring, the airline was offered for sale on 29 September 2001.  However, in an effort to revitalise the airline, the Australian Government announced on 6 November 2001 that they would underwrite the airline's operating costs for three months. The airline began flights between Gladstone and Brisbane on 17 November 2001.  After the airline failed to sell, it was placed into Voluntary Administration on 4 December 2001.  F-28s VH-EWA and VH-EWC were photographed in late 2001 in open storage at Brisbane Airport - along with most the Flight West fleet. 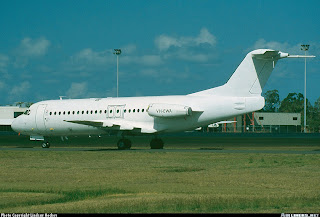 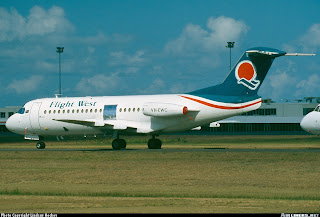 On 16 April 2002 it was announced that Queensland Aviation Holdings had purchased Flight West Airlines and intended to restructure the company under its eventual new name, Alliance Airlines. Most of the assets of Flight West, including the Fokker jets were purchased, and all but one of the Embraer EMB-120s were sold. Alliance Airlines operated the Fokker 100s on selected charter routes from Brisbane, Townsville and Mount Isa for a period of time before suspending these regular services and commencing their ad hoc charter services which still operate to this date.
Posted by Damian F at 9:06 AM