Local plane spotters Jamie C and Tash C have been on hand this week as Gladstone Airport has seen a trio of Alliance Airlines Fokker jet aircraft visiting, mostly operating flights on behalf of QantasLink. 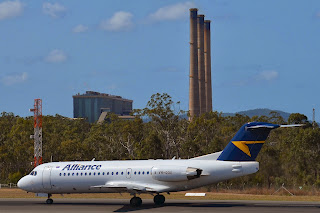 The first to visit was Fokker F-100 VH-XWT which is shown below arriving into Gladstone late on Tuesday 5 November, operating a Fly-in Fly-out (FIFO) charter flight from Brisbane as UTY653.

It departed later that evening for Brisbane as UTY654, however, it returned to Gladstone early the next morning on Wednesday 6 November, again operating a FIFO charter this time as UTY651.

But the action didn't stop there with Alliance Fokker F-70 VH-QQX arriving into the industrial city just after lunch on Wednesday 6 November as UTY2648, which is believed to be a flight operated for QantasLink.

Spotters have noticed that in the last couple of weeks, the Alliance Airlines-operated flights for QantasLink to Rockhampton, Mackay, and Emerald have had flight number changes.

VH-QQX evenutally departed back to Brisbane as UTY2649. 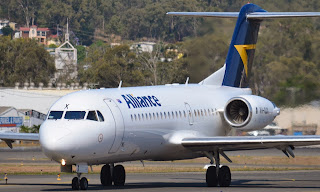 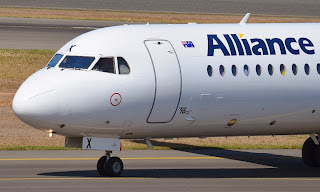 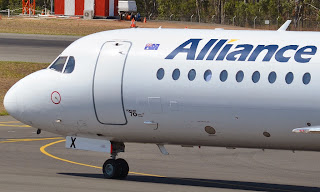 Then, just to top the day off on Wednesday 6 November, Fokker F-100 VH-XWR also touched down at Gladstone from Brisbane, but as UTY2638, again on behalf of QantasLink.

On Thursday 7 November, Alliance Airlines Fokker F-100 VH-FWI then made it a trio of Fokkers at Gladstone Airport for the week, touching down from Brisbane as UTY2642 on behalf of QantasLink.

It was also captured as it departed back to Brisbane as UTY2643.

The exact reason why the Fokker jets were utilised this week is unclear however, there has been a pair of maintenance and engineering issues to affect QantasLink this week.  As reported below, there was a heavy landing and tail-strike encountered this week by one of the QantasLink Dash-8-Q400's - VH-QOT.  Also, one of the QantasLink (Cobham Aviation) Boeing B717-200's - VH-NXN - broke down this week at Brisbane and did not fly for the latter part of the week.

Incidentally, as this Blog post is prepared, it appears that Gladstone is scheduled to receive yet another visit from an Alliance Fokker on Friday 8 November, with F-70 VH-QQX due to return operating as UTY2640 on behalf of QantasLink.

What a great week!  My thanks to Jamie and Tash for capturing some of the fantastic jet action!