On Thursday 26 March, Royal Australian Air Force (RAAF) Airbus A330-200 / KC-30A Multi Role Tanker Transport (MRTT) A39-004 was spotted as it climbed out after completing a missed approach at Rockhampton Airport. 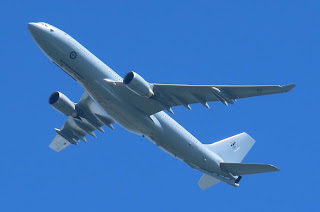 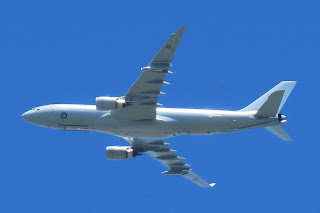 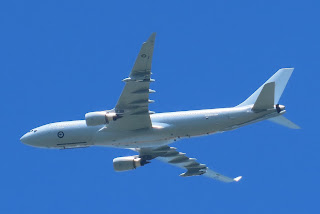 The MRTT flew up from RAAF Base Amberley and after completing the airwork, it continued up to Townsville where it completed another missed approach.  A39-004 then returned South all the way back to Amberley.

Of interest, this was the first time we've sighted A39-004 in Central Queensland since its recent re-paint.

On their entry to RAAF service, the KC-30A fleet initially carried a ‘low-visibility’ grey colour scheme brought over from the predecessor Boeing B707 Tanker Transports. This included the aircraft’s identification numbers, emergency markings, RAAF roundels and squadron insignia being applied in blue grey paint.

Difficulty with identifying individual KC-30As on the tarmac and in the air will see the existing blue-grey markings swapped with dark grey markings that have higher contrast with the light grey applied to the rest of the aircraft.

The first KC-30A to receive these new markings was A39-004 which returned to Australia from its repaint in mid-January, with the dark grey markings to be applied on each KC-30A as it comes due for scheduled repainting.


It certainly makes it a lot easier for us plane spotters to identify the KC-30A with a repaint program applying dark grey markings to the aircraft.