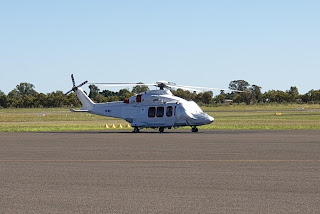 It then departed heading to Birdsville but developed a maintenance issue and returned to Charleville Airport where it was photographed parked up at the start of the week.

Then on Tuesday 17 March, VH-WEJ was then able to depart Charleville Airport and continue to Birdsville.

UPDATE!  On Wednesday 18 March, VH-WEJ continued to Alice Springs, Ayres Rock, Wharburton, Newman and Karratha where it appears to be based.

Of interest, the now all-white VH-WEJ has only this month been re-registered to Babcock Offshore Services Australasia after it previously operated with CHC Helicopters Australia.