Special Visitors at Longreach and Charleville Airports as the Smith Centenary Celebration Flight Participants Pass Through CQ This Week!

On Tuesday 10 March, a special group of ultralight aircraft were noted calling into Longreach Airport as a part of a special transcontinental commemorative flight.  After spending the night, they departed to Charleville Airport on Wednesday 11 March and have eventually continued to Caboolture Aerodrome near Brisbane. 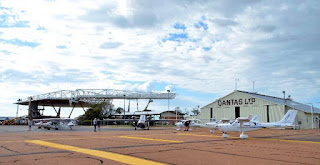 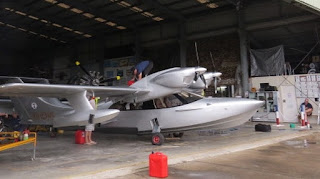 During the month of March, groups of light, historic and ultralight aircraft will make their way from Darwin to Adelaide.  This will celebrate the centenary of the transcontinental flight by Ross and Keith Smith, James Bennett and Walter Shiers across Australia in 1919-20, in their Vickers Vimy aircraft.

The Smiths and their crew had flown from England to Darwin in November and December 1919. This daring feat was sensational news world-wide, but the flight across Australia was equally important. It awakened Australia to the potential of air transport: within a year QANTAS, the second oldest continually operating airline in the world, was established, and Australia is one of the most air-minded countries in the world.

The 2020 celebration flight across Australia will be led by two ultra-modern aircraft. Michael Smith flew his Chaika LLC L65 Sea Bear amphibious aircraft VH-OMS from England to Australia in November-December last year, arriving in Darwin for the hundredth anniversary of the Vimy’s arrival. The Northern Territory Government and local aviation enthusiasts welcomed the Sea Bear’s arrival in Darwin, and Michael is returning to take part in the celebratory flight across Australia. Michael Coates will be flying an ultralight Pipistrel VIRUS SW 121 aircraft VH-LEC that is at the cutting edge of fuel-efficient technology.

A couple of other aircraft joined the flight on the sector between Longreach and Charleville Airports including Progressive Aerodyne Searey LSX Amphibians VH-XWW and VH-ZOY, and Jabiru 430 VH-EDJ.

The route chosen for the 2020 flight largely follows the route used by the Vimy, with a few additions to visit places of special interest in the history of Australian aviation. As well as the group of aircraft making the whole journey, other aircraft are welcome to join for part of the journey. The event will culminate in a major fly-in to Adelaide airports on the weekend of Saturday 21 and Sunday 22 March, and it is expected that many aircraft will take part in this.

The event has been in planning for the past two years. It is a vast co-operative undertaking, with voluntary and enthusiastic involvement by all concerned. The Aviation Historical Society of Australia (NSW) has served as communications hub.

As the planning enters its final stage, a final itinerary is being issued. However, it must be realised that the light aircraft participating are particularly affected by weather conditions. The emphasis of all concerned is on safety, and it may be necessary to alter the itinerary if bad weather occurs. The AHSA NSW website will have constantly updated information, and some aircraft will have tracking devices which can be accessed by the internet. An expert meteorologist and pilot has estimated that we have better than an 80% chance of carrying out the itinerary basically as specified, and there are provisions for catch-up days if needed.

A full pilots handbook will be issued early February, but any aircraft owners and pilots who are interested in participating are advised to make contact with AHSA as soon as possible. Numbers of participants are limited in some places. 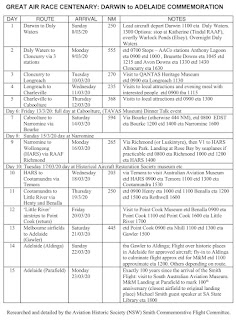 Follow the progress of the flight at:  http://ahsansw.com
Posted by Damian F at 8:57 AM