During the afternoon on Saturday 7 March, QantasLink (Cobham Aviation-operated) Boeing B717-200 VH-YQS looked to make its first visit into Central Queensland only days after it returned from overseas maintenance where it was re-painted into the new Qantas / QantasLink 'Silver-Roo' colour scheme. 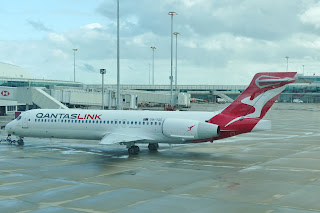 It called into Mackay Airport while operating the QJE1774/1775 service from and back to Brisbane. 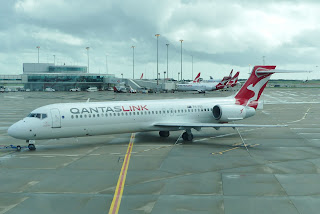 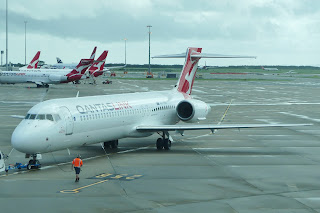 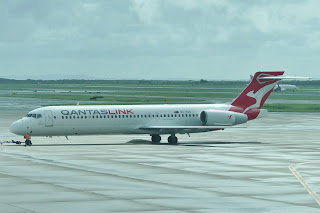 VH-YQS is pictured above at Brisbane Airport on Tuesday 10 March.

VH-YQS underwent planned maintenance at Singapore (Seletar) Airport in February and it is believed that while it was there, it was re-painted into the new Qantas / QantasLink colour scheme.  VH-YQS ferried back to Australia via Broome in Western Australia and then Cairns during the previous week, and it is now the seventh of the fleet of Cobham Aviation-operated Boeing B717-200 regional jets to wear the new and updated Qantas livery and kangaroo logo, which was introduced to coincide with the introduction the Boeing B787 Dreamliner into service with the airline in 2017.

It also appears that the previously un-named VH-YQS has now been named 'Great Otway National Park'. 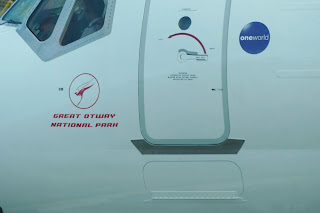 VH-YQS is also the first of the 2-class QantasLink B717-200 aircraft to be re-painted having previously worn the 2007 'New Roo' style livery.

Of interest, VH-YQS has had an interesting history to the present day.  The Boeing B717-2BL (c/n 55178-5128) was originally ordered new in 2004 by Midwest Airlines of Milwaukee, Wisconsin in the USA and entered the US Aircraft Register as N916ME in March 2004.


It operated with the airline until 2008 and was stored at Victorville soon after.  In early 2009, the B717-200 was leased to Mexicana Click and was entered onto the Mexican Aircraft Register as XA-CLE in June 2009.


Mexicana Click ceased operations in 2010 and the aircraft was stored at Mexico City.  In January 2011, it was cancelled from the Mexican Aircraft Register and re-entered onto the United States Aircraft Register as N406BC.  The B717-200 was then again stored at Victorville where it remained until August 2013 when it was prepared for lease to Qantas Airways.


N406BC was ferried to Jacksonville and painted into full Qantas / QantasLink colours before it was then subsequently ferried to Australia where it arrived into Adelaide in South Australia in September 2013.


It was then registered VH-YQS in October 2013 with National Jet Systems (now Cobham Aviation Services) as the registered operator.  VH-YQS entered service with QantasLink in November 2013 when it operated as QFA1545 from Brisbane to Canberra.


It remains one of seven B717-200s in the Qantas / QantasLink fleet to be in a 2-class configuration with 12 Business Class and 98 Economy Class seats, along with Q-Streaming - Qantas' wireless entertainment system.
Posted by Damian F at 6:00 PM