Certainly a very nice surprise visitor to both Bundaberg and Gladstone Airports on Friday 24 April was Alliance Airlines Fokker F-70 jet VH-KBX.  It was operating on behalf of Virgin Australia on 'new' triangular route which sees the VOZ2905 service depart Brisbane for Gladstone Airport but with a stop at Bundaberg Airport on the way.  The VOZ2904 service then returns direct to Brisbane from Gladstone Airport. 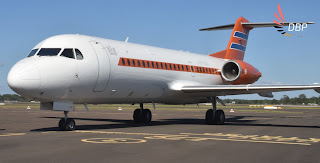 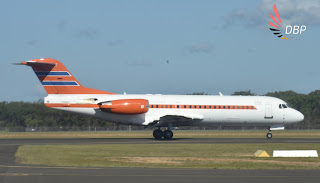 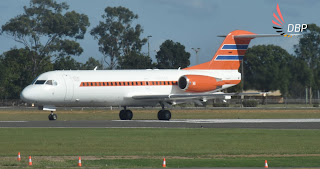 It appears that this new routing has commenced this week.

Of interest, Fokker F-70 jet VH-KBX previously flew with the Royal Netherlands Air Force / Government of the Netherlands as a VIP transport aircraft and carried the Dutch registration marking of PH-KBX.  It arrived into Brisbane in August 2017 and entered the Australian Aircraft Register as VH-KBX soon after.  VH-KBX looked to finally enter service in May last year.  VH-KBX has reportedly maintained its VIP interior to possibly become Alliance Airlines' new 'corporate charter aircraft'.

Meanwhile, it was a positive start this week with both Virgin Australia and Qantas Airways ramping up their domestic flights with a $165 million assist from Federal Government.   Under the package, Qantas and Virgin will reinstate over 220 flights per week on routes serving all capital cities and 36 larger regional centres across all states and territories to create what's called a 'minimum domestic network'.

However, as was widely reported, also this week, Virgin Australia, with a 20-year history of operating in Australia, announced it had gone into voluntary administration.  With $5 billion in debt and no hope of a government bailout, the company said it planned to "recapitalise the business" and appointed accounting firm Deloitte to act as its administrator.

In 2000, Virgin Australia first entered the Australian aviation market with just one route, two aircraft and 200 employees.  Then known as Virgin Blue, the airline's first flight was from Brisbane to Sydney on Thursday 31 August 2000.