On Tuesday 21 April, Regional Express (REX) SAAB 340B VH-ZRC was spotted on the ground at Emerald Airport after earlier arriving from Brisbane on what looked to be a closed charter flight on behalf of Pel-Air Express as PFY9872. 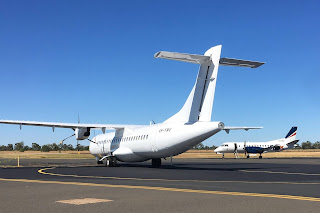 It then returned to Brisbane but as PFY9273.

As shown in the photo above, the new Hevilift Australia ATR 72-500 VH-YWV was back at Emerald Airport also on Tuesday 21 April.  As it did the previous day during its first visit to Central Queensland - see Blog post below - VH-YWV arrived from and later departed back to Brisbane on a Fly-in Fly-out (FIFO) closed charter flight as HT737/8.

UPDATE!  On Wednesday 22 April, fellow REX SAAB 340B VH-ZLG was noted also visiting Emerald Airport, also on a closed charter flight.  It looked to arrive from Brisbane as RXA9272 and later return there as RXA9873.

UPDATE!  On Thursday 23 April, VH-ZLG called into Mackay Airport, again arriving from and later departed back to Brisbane but as RXA9942/9243.