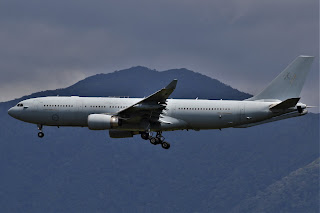 It initially looked to fly up from RAAF Base Amberley to Cairns (as shown above) where it landed for a short time.  A39-001 then returned South to Rocky.

Once in the area, it had lined up for a missed approach but was advised by air traffic control to 'go around' earlier than usual due to medical priority aircraft departing from Rockhampton Airport. Consequently, the KC-30’s missed approach was at a lot higher level than usual.

Of interest, this was the second time in the week that A39-001 has visited Rockhampton Airport while completing training.