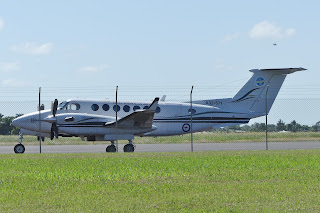 The RAAF's 32 Squadron operated Super King Air had flown from its home at RAAF Base East Sale and was heard to be using the radio callsign of "Beaufort 04".

After around an hour on the ground, A32-671 "Beaufort 04" departed Mackay Airport and returned to East Sale.

Sincere thanks to local plane spotter 'JM' who was again at the right place at the right time to capture this great photo!