On Thursday 9 April, Townsville Airlines Beech 1900D VH-RUE was noted arriving into Rockhampton Airport.  It had reportedly advised Air Traffic Control (ATC) that after departing Brisbane that they had landing gear problems, but elected to continue to Rocky.  Once on the ground at Rockhampton Airport, damage to the front wheel was observed and aircraft towed to a parking position near the Royal Flying Doctor Sevice (RDFS) hangar.


VH-RUE had earlier flown down from Cairns to Brisbane and was due to return to Far North Queensland after popping into Rockhampton Airport presumably for fuel. 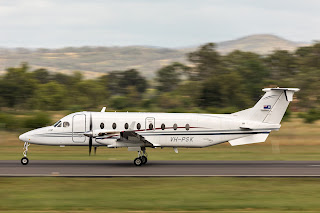 Of interest, VH-PSK was also noted visiting Rockhampton and Mackay Airports at the start of the week on Monday 6 April.

UPDATE!  VH-PSK made a rare weekend visit to Rockhampton Airport on Saturday 11 April.  It arrived from Cairns and Townsville and then departed to Brisbane.  VH-PSK later returned to Cairns from Brisbane via Townsville.

The Queensland Police Service (Airwing) (State of Queensland) Cessna 560 Citation Ultra bizjet VH-PSU was also on the air, also on Thursday 9 April.  After earlier completing airwork at Bundaberg Airport while on a flight out of and back to Brisbane, during the afternoon, it was noted landing at Rockhampton Airport presumably to pick-up and transport the passengers of the Beech 1900D VH-RUE up to Cairns.  Indeed VH-PSU then departed Rockhampton Airport for Cairns before it later returned to Brisbane.

It also appears that Hinterland Aviation Beech B200 King Air VH-HLJ may have also been chartered to ferry the stranded passengers up to Cairns as it too was noted visiting Rockhampton Airport also on Thursday 9 April, arriving from and departing back to Cairns, as 'HND467' / "Hinterland 467".

Finally, a couple of other light General Aviation (GA) aircraft to be noted visiting Rockhampton Airport, also on Thursday 9 April, included Austrek Aviation Beech B200 Super King Air VH-ZGD which looked to arrive from Toowoomba and then later depart to Archerfield before it then headed back up the range to Toowoomba.  While Pilatus PC-12/45 VH-PID also visited Rockhampton Airport from its Toowoomba base.