Visiting Emerald Airport on Wednesday 26 January, it was a pleasure to see that the $7.7 million refurbishment and extension of the terminal area is now complete and fully operational. 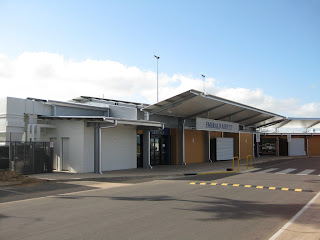 During this last phase of the refurbishment, a new, and much bigger arrivals area has been built in the old all-purpose terminal. The arrivals area now boasts a new baggage collection carousel, as can be seen in the pictures below. 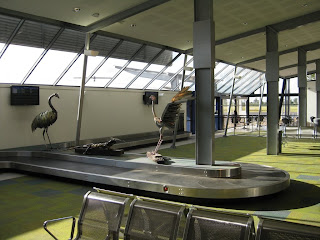 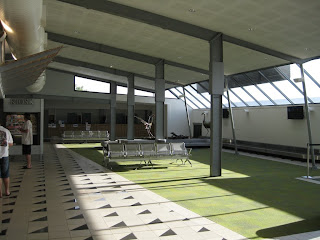 The airport kiosk and car-hire desks have been retained in the arrivals area and thse have also had a face-lift. A new, but smaller, sit-down eating area has also opened, but this little area has large windows with a great view over the two Airport Gates, and further to the Runway. Pictured below are the area itself with the morning's QantasLink Dash-8-Q400, VH-QOF, preparing to depart for Brisbane. 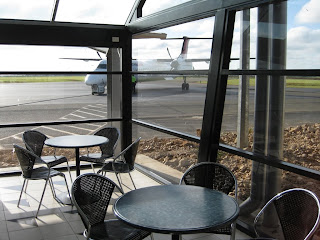 From the earlier stages of the Airport redevelopment, the check-in area and the departure lounge, continue to function well and remain unchanged. Plans are still in place for security screening to added at the entrance of the departure lounge in the future.

Overall though, the views out of the new terminal - especially of the smaller GA aircraft on the visitors ramp and outside Advance Aviation (formerly Central Airlines) - have actually become a little more difficult, as the big observation area from the previous terminal has now become a restricted access area with the public discouraged from walking through it.

The outdoor areas, however remain available, and spotters are encouraged to watch planes from these vantage points - Spotting information HERE.

Visitors will note too that a new flight information system has been created, with large television screens throughout the airport displaying up-to-date flight information. This information has also recently gone online and is available on the Airport's website - link HERE.
Posted by Damian F at 12:08 PM