With the recent flood crisis in Central Queensland, several Australian Army Skiorsky S-70A Blackhawk helicopters have been spotted landing at the Gladstone Airport.

The helicopters were part of the Operation Queensland Flood Assist Joint Taskforce 637 - the joint taskforce run by the Australian Defence Force along with Queensland and Australian Governments’ responding to the flood crisis.

The picture below shows one of the Blackhawks (which are based at Gallipoli Barracks Enoggera in Brisbane) parked on the Gladstone Airport ramp. 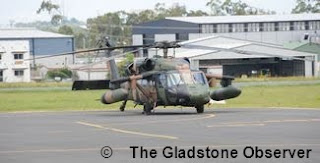 The aircraft with seven people on board was preparing to land at Gladstone Airport when instruments alerted the pilot that his landing gear had not activated. The pilot did a fuel drop over the ocean before flying low over the airport for a visual inspection by a helicopter. The helicopter alerted the pilot that his landing gear was down and the plane (pictured below) landed without incident. 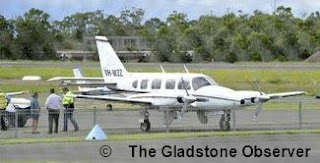 Queensland Police Service, Queensland Fire and Rescue Service and Queensland Ambulance Service were all in attendance. A report will be made to CASA and an investigation will follow.
Posted by Damian F at 12:00 PM