The following photos taken by Ben O on Sunday 2 January, show a near empty Rockhampton Airport. All the planes have now been moved, and it looks as if one of the busiest regional airports in Australia could be out of action for 20 days. 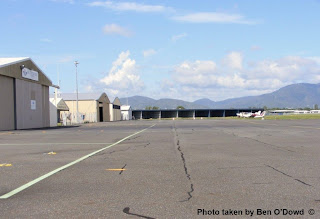 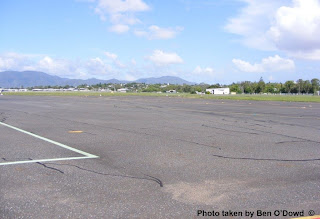 The SES have put the finishing touches to the metal flood barrier surrounding the terminal and other airport buildings.

Meanwhile, the RACQ says it has removed 109 of 172 vehicles parked at Rockhampton Airport before it was inundated with floodwaters. It says most of the others were moved by other companies. The one car that remains in the secure carpark could not be moved because of mechanical failure. Rockhampton Regional Council says any other cars in the vicinity of the airport which are inundated would have been illegally parked.

The following photos from the Internet show the extent of the flooding at Rockhampton Airport. The main runway has water over the southern section, and although there is no flooding yet in the terminal, it will take days to get the airport running once the water has subsided. 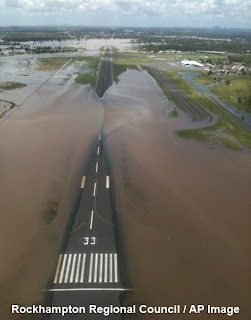 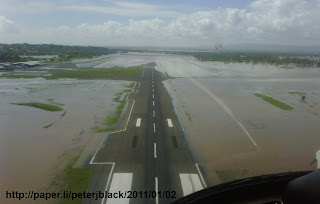 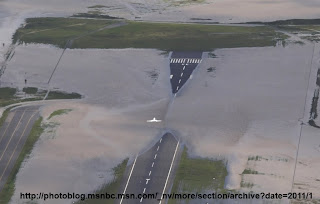 With Rockhampton Airport out of action, a new base for air transport has been established at the Rockhampton Heritage Village.

A makeshift air traffic control centre has been set up in a mock-up of the city’s original fire station and helicopters – the only aircraft now allowed in Rockhampton airspace – take off and land on the picturesque village green.

The Royal Flying Doctor Service has relocated from Rockhampton to Brisbane during the flood emergency.
Posted by Damian F at 8:04 PM