More changes are underway as Mackay Airport prepares to move into a new phase of construction.

From Thursday 20 January, food and beverage services were moved temporarily to allow work to begin on the retail section of the $3 million terminal redevelopment.

Mamma Leone’s Pizza and a new bar would also open at this time. 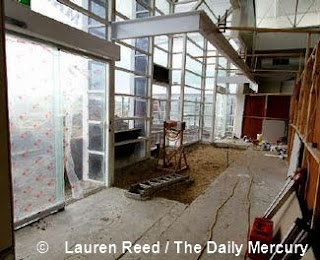 The bar would face the observation area (as shown above), while the new food and beverage outlets would be located on what was the arrivals walkway.

The new bar – which has been named after the Airport took onboard the suggestions of travellers – will be called The Barra Pond. There used to be a very popular barramundi pond in the observation area.

In the final stages of construction the security section will move closer to check-in so passengers will be able to pass through security before being able to access shops and food.

Once construction is completed in March, it is planned that the airport would be able to offer exciting retail facilities, including a bar and more food outlets in a bid to lift the profile of Mackay Airport.
Posted by Damian F at 12:23 PM