It's been an interesting week at Gladstone Airport this week, with strong gusty winds most days, and few interesting movements to boot!  Jamie C has been on hand, and has sent through some lovely photos - some taken under very trying conditions - as some wind gusts reached 60km/h plus!

By far the highlight of the last couple of days was the arrival into Gladstone Airport of Australian Army Sikorsky S-70A-9 Blackhawk A25-212 on Wednesday 12 December.

After completing a couple of circuits of the Airport, A25-212 eventually landed at the field to take on fuel. 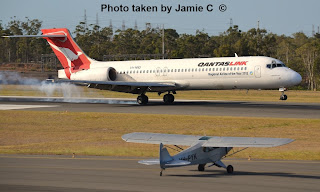 On Tuesday 11 December, QantasLink (Cobham Aviation) Boeing B717-200 VH-NXI was spotted by Jamie.  VH-NXI wears the 'new' Qantas colour scheme and titles after being repainted in Townsville.

As the day wore on, the winds picked up, and Jamie actually struggled to hold the camera steady as he took a few photos of some of the afternoon movements into Gladstone Airport. 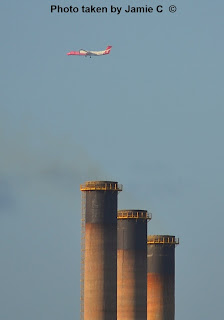 Even with QantasLink Dash-8-Q400 VH-QOH being a spectacular looking aircraft in its 'Pink' Cancer Awareness colour scheme, Jamie was surprised by - and provides photos of - its very spectacular take-off which featured one of the shortest take-off rolls we've ever seen!

No doubt the product of good strong headwind! 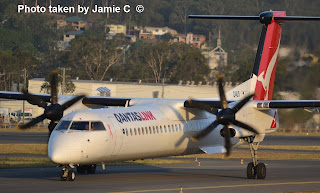 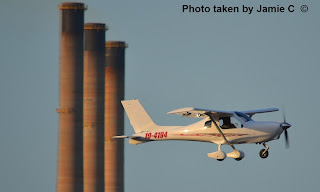 I do quite like that photo of the little Jabiru departing Gladstone with the smoke stacks of the Gladstone Power Station in the background!  Thanks Jamie!
Posted by Damian F at 11:59 PM