In the days leading up to Christmas Day, there were several additional flights in and out of some Central Queensland airports - we've already highlighted two such occurrences - at Thangool / Biloela Airport (HERE) and at Mackay Airport (HERE). 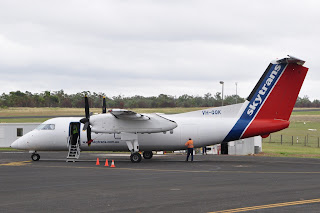 Skytrans also operated two additional FIFO charter flights between Brisbane and Emerald on behalf of AERgO, with Dash-8-100 VH-QQJ noted flying as SKP714/715 and Dash-8-300 VH-QQP noted flying as SKP712/713 on Monday 24 December.  Interesting that have been no extra SAAB 340 flights!

Probably the busiest airport though seemed to be Moranbah Airport where over the five days leading up to Christmas Day, there were as many as 48 QantasLink operated Dash-8 flights from and back to Brisbane.  Of these, at least 20 were believed to be FIFO charter flights.