The Mohawk 298 originally started life as an Aerospatiale N262 Fregate, with production beginning in the early 1960s. In 1975, the first re-engined (with Pratt & Whitney Canada PT6A-45 engines) and modified N262 emerged from the hangars of Frakes Aviation in the United States as the Mohawk 298.  This new designation came about as Mohawk Air Services oversaw the modifications, while '298' was the American regulation that the plane had to satisfy at the time - 'FAR298'.

In 1987/88, Lloyd Aviation Jet Charter imported 4 examples to Australia from the United States for service in Queensland. At that time, Lloyd was also operating helicopters from Gladstone to the nearby Islands - ironically based from the same hangar and apron Australian Helicopters uses today at Gladstone Airport.

Initially there was a delay before the Mohawk entered service because of issues associated with satisfying CASA regulations.  However these problems were eventually overcome and the first Mohawk 298 to registered in Australia - VH-HEI - commenced Lloyd's Queensland operations with a 26-seat passenger configuration connecting Brisbane and Gladstone.  This was quickly followed by introduction of a Brisbane to Bundaberg route as well. 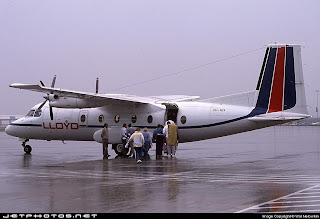 During 1988, the other three Mohawks - VH-HIX (pictured above), VH-HKS, and VH-HKT - all joined the Lloyd fleet and were noted operating flights between Brisbane and Gladstone and Bundaberg. 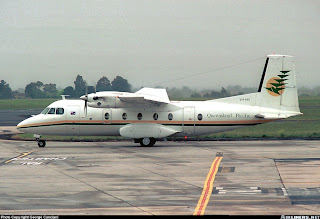 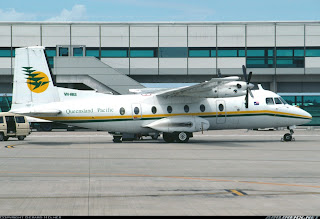 In March 1991, Queensland Pacific Airlines ceased operations.  In April 1991, the four Mohawk 298 aircraft were either sold or leased to Southern Pacific Regional Airlines which eventually commenced operations between Brisbane and Gladstone and Bundaberg. 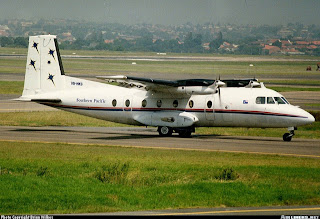 In April 1993, Southern Pacific Regional Airlines ceased operations, and the four Mowhawk aircraft were eventually auctioned off and purchased by the United Kingdom (UK) based Majestic Group.  They were then registered to start-up airline Majestic Airways, who commenced operations in May 1994 with flights between Brisbane and Hervey Bay, Gladstone, and Bundaberg (where VH-HEI is pictured below in 1994). 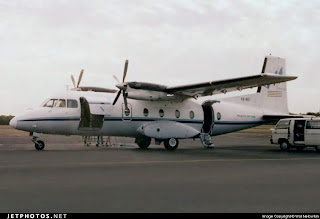 Within a year though, Majestic Airways ceased operations and the Mohawk 298 aircraft were all eventually struck off the Australia register.

Today, only one of the four Mowhawk 298 aircraft remains in-tact with VH-HIX on display at the Queensland Air Museum at Caloundra (as shown below). 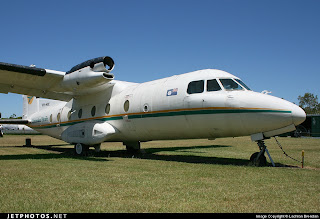 VH-HIX is displayed in full Queensland Pacific colours.  The remaining three aircraft were all stripped of usable parts and then scuttled to become marine filling on the Great Barrier Reef.
Posted by Damian F at 7:08 AM