Jamie C has enjoyed some lovely weather, and, some equally lovely aircraft movements, at Gladstone Airport over the last few days.

On Friday 7 December, Air Link Beech 1900D VH-RUE is pictured departing Gladstone for Brisbane.  It had arrived the day before from Roma.  It was VH-RUE's second visit into Gladstone for the week.

On Saturday 8 December, Jamie spotted a pair of AeroPower helicopters.  Early in the morning, Hughes Helicopters 369FF VH-PLF departed Gladstone with looked to be beach balls on its skids! 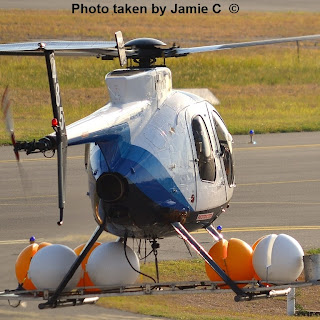 The 'balls' are most probably powerline indicators or something similar.  AeroPower conduct inspections and maintenance on high tension powerlines all over Central Queensland. 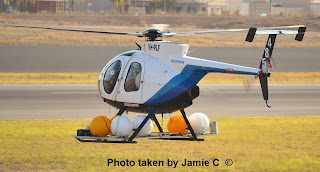 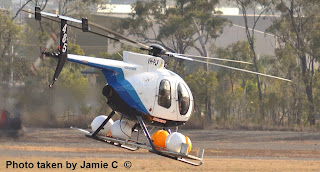 There were also a couple of commercial arrivals into Gladstone Airport on Saturday 8 December that Jamie caught.  QantasLink Dash-8-Q400 VH-QOR is shown taxiing for departure in the early morning light bound for Brisbane as QLK2331. 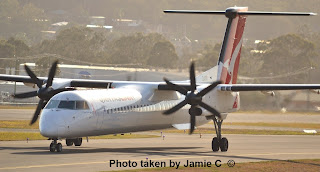 Jamie also sent through some fantastic photos of QantasLink (Cobham Aviation) Boeing B717-200 VH-NXG as it arrived in the late afternoon from Brisbane.

Great photos as always Jamie - many thanks!
Posted by Damian F at 10:04 PM