It was interesting to note that on Friday 28 July, a former frequent visitor to Central Queensland - and in particular Hamilton Island Airport - in the form of Shortstop Jet Charter British Aerospace BAe-125-1000B bizjet VH-LMP departed Australia and now wears the San Marino registration marking of T7-SMA. 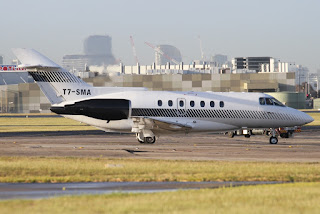 It is pictured departing Melbourne (Essendon) Airport for Broome in Western Australia before it later continued to the Cocos (Keeling) Islands in the Indian Ocean.

As VH-LMP, the BAe-125-1000B bizjet made its final visit to CQ in early February when it visited Hamilton Island Airport, departing to Essendon on Sunday 5 February.

Sincere thanks to Adelaide-based plane spotter Stefan P for allowing us to share his great photo!