A nice corporate bizjet to pop into CQ - well the South-Western part of CQ - on Tuesday 29 August was Beijing Capital Airlines (China) Gulfstream G650 bizjet B-3255.  It is shown below on the Roma Airport ramp preparing for departure back to Brisbane from where it arrived earlier in the day. 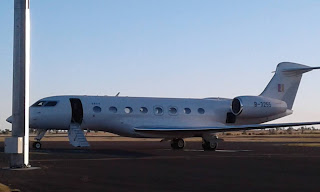 Prior to this, B-3255 arrived into the Queensland capital from Hong Kong, completing an eight hour plus flight through the night.

Of interest, B-3255 was the first Gulfstream G650 bizjet to be registered on the Chinese mainland B- registry.  It was only delivered to Tianjin in China in May this year.

UPDATE!  On Wednesday 30 August, B-3255 departed Brisbane and returned to Hong Kong.

Sincere thanks to local plane spotter Ken D for taking the time to capture and send through this great photo of a great visitor to Roma Airport!