During the Winter months, we often see Skytrans Airlines Dash-8-100 aircraft pop into various CQ Airports usually transporting local sports teams around Queensland to participate in State-based sports competitions.  As well as continuing to operate Regular Passenger Transport (RPT) flights based at Cairns Airport, I also noted this recent photo of Skytrans Dash-8-100 VH-QQB flying into Brisbane Airport on completion of one of its many FIFO charter flights to and from Taroom or Chinchilla Aerodromes. 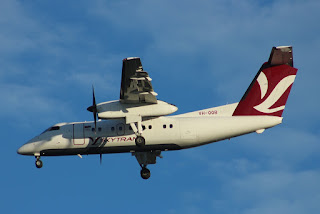 Meanwhile, over the last few months, the fantastic FNQ Skies Blog has posted photos and information as a pair of Skytrans Dash-8-100s were cut-up and scrapped at Cairns Airport.

Dash-8-100 VH-QQA was photographed being scrapped at Cairns Airport on Saturday 16 September. 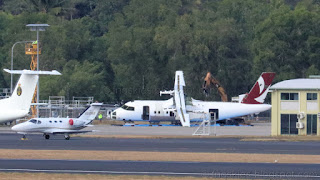 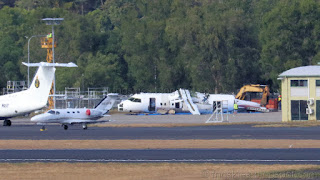 The aircraft was damaged by a violent hail storm while on the ground at Chinchilla Aerodrome in late October 2015 and after initial assessment, it was ferried to Cairns via Roma Airport in November 2015.  This turned out to be its last flight, as VH-QQA has never re-entered service with Skytrans.


VH-QQA operated RPT services from Cairns Airport to the Gulf and Cape York between 2011 to 2015.  Prior to this time, it also operated with Maroomba Airlines out of Perth Airport in Western Australia.

Meanwhile, Dash-8-100 VH-QQC was photographed below partially scrapped in Cairns in early October and was then de-registered on Monday 16 October. 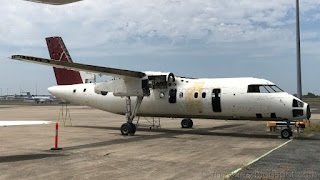 Photos taken by Lloyd Fox and the FNQ Skies Blog  ©
Posted by Damian F at 10:00 AM