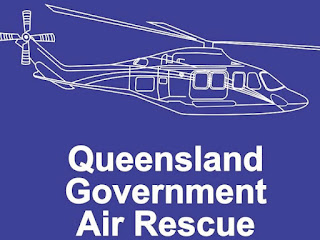 VH-ESH was heard using the radio callsign of "Rescue 500" - the usual callsign of the Archerfield-based QGAir Rescue helicopter that flys missions around the South-East corner of the state.

As posted below, fellow QGAir Agusta AW139 VH-EZJ flew North to Townsville at the start of last week as "Rescue 500" and was noted assisting with the rescue and recovery efforts after Tropical Cyclone Nora made landfall.  I presume the helicopter 'swap' was to allow VH-ESH to now enter the maintenance hangar.
Posted by Damian F at 7:12 PM