On Sunday 29 July, VH-QOX made multiple visits to CQ Airports - it was initially noted visiting Mackay Airport from Cairns and Townsville as QLK2305 before it departed to Brisbane as QLK2513.  It was then spotted operating into Longreach Airport from and back to Brisbane as QLK2534/2535.  VH-QOX then flew into Rockhampton Airport as QLK2370 where it spent the night. 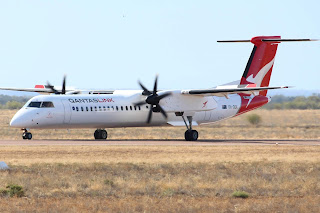 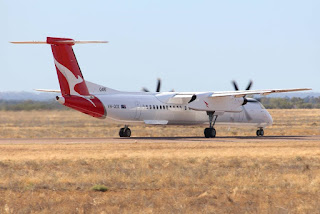 Then, on Monday 30 July, VH-QOX was spotted back at Mackay Airport where it made two visits over the course of the day. 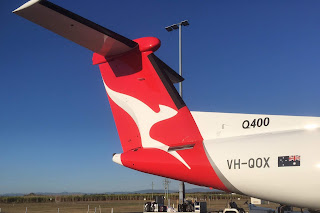 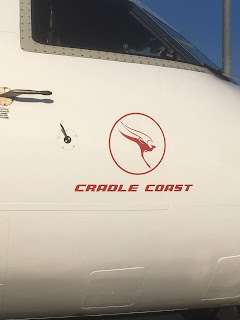 As shown, VH-QOX continues to wear its original name of 'Cradle Coast'. 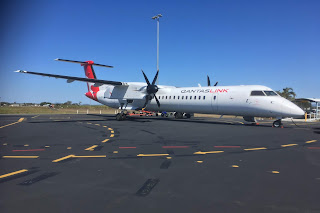 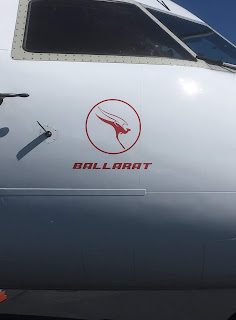 As we reported previously, VH-QOV emerged from the Flying Colours paint-shop at Townsville Airport earlier in the month, joining eight other Dash-8-Q400s in the new and updated Qantas livery and kangaroo logo, which was introduced to coincide with the introduction the Boeing B787 Dreamliner into service with the airline late last year.  VH-QOV was also adorned with the name 'Ballarat' after being previously un-named.

Finally, at the time of writing, it is unclear which Dash-8-Q400 is now in the paint-shop in Townsville.  While it has also been interesting to note that Dash-8-Q400 VH-QOJ continues to be on the ground at Tamworth in New South Wales - perhaps it too has entered the maintenance hangar / paint-shop??!!

UPDATE! We have since seen that VH-QOJ was at Tamworth for maintenance ONLY - it was re-painted at Townsville during September.

UPDATE!  We have since learned that QantasLink Dash-8-200 VH-TQX was in the paint-shop at Townsville, arriving from Sydney via Brisbane on Saturday 28 July.