Interesting to note that on Monday 27 April, the third and final of three planned visits by Nauru Airlines Boeing B737-300 aircraft on closed charter flights into Mackay Airport from Brisbane had a bit of a drama with two attempts to complete the inbound flight from the capital.

Nauru Airlines B737-300 VH-PNI originally departed Brisbane for Mackay Airport as RON938 but encountered a problem and returned to Brisbane around 50 minutes after departure.

Sistership VH-YNU then later departed Brisbane Airport also bound for Mackay Airport also as RON938 with it touching down in the sugar city around sunset. 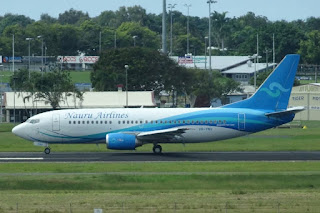 The colourful little Boeing then returned to Brisbane soon after as RON939.

Of interest, VH-YNU operated the first of the three charter flights last Tuesday 21 April (as shown) with VH-PNI operating the second charter flight on Friday 24 April.

Great to see a bit colour in the region!