As mentioned below, late on Tuesday 30 March, new Navair Flight Operations Embraer EMB-500 Phenom 100 bizjet VH-LXZ was noted arriving into Rockhampton Airport.  It had earlier flown down from Townsville to Mackay Airport before then heading to Rocky.  Then early on Wednesday 31 March, VH-LXZ was photographed below resting on the Rockhampton Airport bizjet apron at the General Aviation (GA) area. 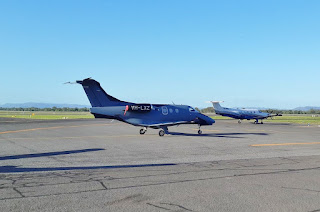 Later, VH-LXZ was photographed as it departed Rockhampton Airport for Bundaberg Airport. 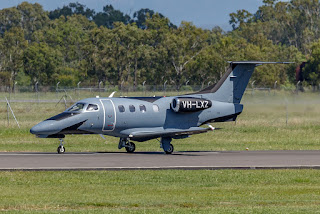 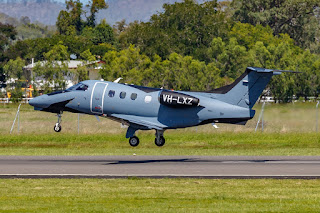 VH-LXZ was also photographed on the ground at Bundaberg Airport and later departed Bundy for Bankstown where it appears to be based. 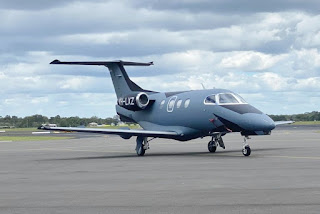 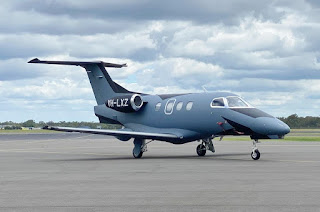 Meanwhile, also on Wednesday 31 March, Brisbane-based Cessna 525 CitationJet M2 bizjet VH-YWS was noted visiting Hamilton Island Airport.  It arrived from Archerfield and the Sunshine Coast before it later returned to its Archerfield base.
Finally, a number of light General Aviation (GA) aircraft were noted and spotted visiting various Central Queensland Airports, also on Wednesday 31 March.
After being spotted arriving the previous day (below), Pilatus PC-12/45 VH-PID departed Rockhampton Airport for its Toowoomba base. 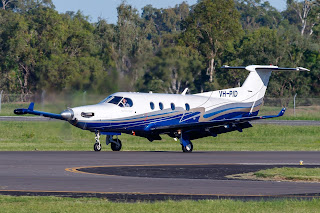 McDermott Aviation Group / Machjet International Beech B200 King Air VH-MWZ looked to arrive into Rockhampton Airport from Mackay Airport before departing down to Maryborough Airport.  VH-MWZ then appeared to fly up to Townsville Airport.
It looks like VH-MWZ originally arrived into Mackay Airport from Perth late on Tuesday 30 March.
Edwards Coaches Cessna 441 VH-TAZ flew into Mackay Airport from Armidale via Bankstown and the Gold Coast.  It later returned to its Armidale base.
BPW Aviation / Airspeed Aviation Cessna 441 Conquest II VH-EQU visited my local Clermont Aerodrome from Maitland.
Gulf Aircraft Textron Aviation (Cessna) 208 Caravan VH-PYO arrived into Longreach Airport from Mount Isa and later departed to the Gold Coast.
Cessna 210L VH-FMT also popped into Longreach Airport, arriving from Hillston and Griffith.  It is due to depart to Hughenden and Mareeba on Thursday 1 April.
UPDATE!  On Friday 2 April, VH-FMT passed through Emerald Airport, arriving from Mareeba and departing to Toowoomba.
Victoria-based Beech A36 Bonanza VH-WBO landed at Emerald Airport from Port Macquarie before later departing to Cairns. It had arrived into Port Macquarie from Lord Howe Island on the previous day.
And a trio to Brescon (Toowoomba) Beech B200 King Air turboprops VH-WXB, VH-XDW and VH-WXN were all noted arriving into Emerald Airport from Toowoomba-Wellcamp.  VH-WXB then departed to Townsville and Cairns while VH-XDW and VH-WXN both departed direct to Cairns.
During the afternoon, both VH-XDW and VH-WXB flew back down direct to Wellcamp, while VH-WXN flew to Wellcamp via at Emerald Airport.
Photos taken by 'AC', Steve Vit and Dan B  ©
Posted by Damian F at 8:48 PM