On Tuesday 30 March, new Navair Flight Operations Embraer EMB-500 Phenom 100 bizjet VH-LXZ was noted arriving into Mackay Airport from Townsville.  As mentioned below, it had arrived into North Queensland the previous day after flying up from Bankstown via Emerald Airport. 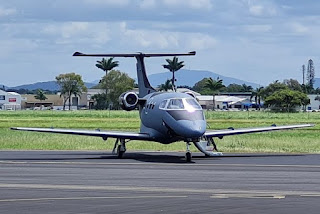 After being photographed and spending the afternoon on the ground, around dusk on Tuesday 30 March, VH-LXZ departed Mackay Airport and flew down to Rockhampton Airport.
At the time of writing, it appears that VH-LXZ is staying for at least the night at Rockhampton Airport.
Photo taken by 'AC'  ©
Posted by Damian F at 8:22 PM