A Couple of Photos of Skytrans Airlines Dash-8-100 VH-QQC & VH-QQI at Chinchilla Aerodrome - Plus More!

On Monday 1 November, we've had shared to us the rare sight of a pair of Skytrans Airlines Dash-8-100 aircraft on the ground together at Chinchilla Aerodrome. 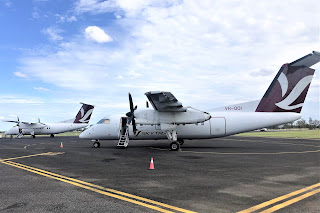 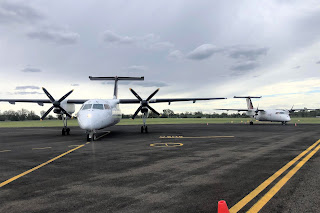 VH-QQI looked to arrive from Brisbane as SKP503 but possibly had a technical issue as it then didn't depart until the late afternoon back to Brisbane as SKP738.

While VH-QQC flew up to Chinchilla Aerodrome as SKP733 before then flying up to Rockhampton Airport as SKP510. VH-QQC then completed a Fly-in Fly-out (FIFO) charter flight between Rockhampton Airport and the Labona Station Airstrip within Adani Australia's (Bravus Mining & Resources) Carmichael Coal Mine site and back to Rocky as SKP771/2.

Of interest, fellow Skytrans Dash-8-100 VH-QQG flew the coast run from Cairns to Proserpine (Whitsunday Coast) and Rockhampton Airports and back as SKP81/2.

And Skytrans Dash-8-100 VH-QQB completed a FIFO charter flight from Townsville to Labona Station Airstrip and back to Townsville as SKP761/2.

Finally, also on Monday 1 November, it was noted that Hinterland Aviation Beech B200 King Air VH-HJS visited the Labona Station Airstrip from Cairns as 'HND420' / "Hinterland 420".
All photos taken by 'AC'  ©
Posted by Damian F at 8:39 PM