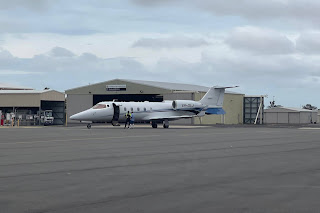 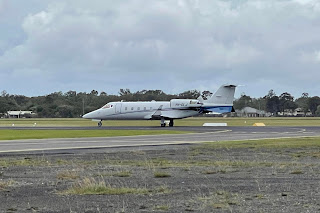 During a busy day of flying, it arrived from Brisbane and then departed to Townsville.  It also called into Cairns before returning to Townsville and then back to Brisbane.
Meanwhile, another pair of familiar corporate bizjets to pop into Central Queensland Airports, also on Tuesday 9 November, included MacKellar Mining Equipment Pty Ltd (Revesco Aviation) Cessna 680 Citation Sovereign bizjet VH-MMC which arrived into Biloela / Thangool Airport from the Sunshine Coast.
UPDATE!  After staying for the night, on Wednesday 10 November, VH-MMC departed Biloela / Thangool Airport for Townsville before then returning to the Sunshine Coast.
And Stroud Aviation and Transportation (Boonah) Cessna 510 Citation Mustang bizjet VH-SHI returned to Mackay Airport from Cooktown before it then departed to Toowoomba and Archerfield.
VH-SHI had flown North to Cooktown, also via Mackay Airport on Monday 8 November.
Finally, also on Tuesday 9 November, Link Airways (Corporate Air / Vee H Aviation) SAAB 340B VH-VEO completed another flight between Brisbane and Rockhampton Airport and back to Brisbane.
All photos and video taken by Dan B  ©
Posted by Damian F at 9:49 PM