Royal Australian Air Force (RAAF) VIP 34 Squadron Transport Bizjets Pop into CQ Airports on Training Flights on Tuesday - Should be Back on Wednesday!

On Tuesday 2 November, there was a nice pair of Royal Australian Air Force (RAAF) VIP 34 Squadron aircraft that were noted calling into some Central Queensland Airports while on one of their now becoming frequent training flights up the New South Wales and Queensland coasts.
Royal Australian Air Force (RAAF) Boeing B737-7DT(BBJ) A36-001 as "Envoy 34" departed Canberra for Coffs Harbour before it then landed at Bundaberg Airport.  It then continued up to land at Hamilton Island Airport before departing there to Cairns for a missed approach and then landing at Townsville (pictured) for the night. 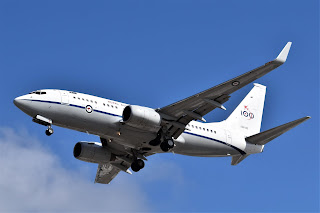 While fellow Royal Australian Air Force (RAAF) Dassault Falcon 7X bizjet A56-001 as "Envoy 39" also followed the same track as the BBJ, departing Canberra for Coffs Harbour and then landing at Bundaberg and Hamilton Island Airports.  It too completed a missed approach at Cairns before flying back down to and landing at Townsville (pictured), also for the night. 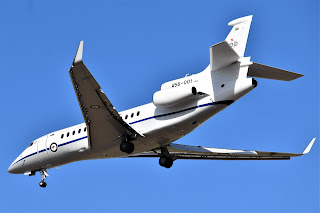 It is expected that both aircraft will fly back South on Wednesday 3 November, with previous flights landing at Proserpine (Whitsunday Coast) and Rockhampton Airports before they head to the South-East corner of the state and then back to Canberra.
All photos taken by Graham Aspinall  ©
Posted by Damian F at 9:11 PM