On Sunday 31 October, Virgin Australia Boeing B737-800 VH-YIT was noted calling into Mackay Airport, making its first visit into Central Queensland after recently returning from maintenance where it was retrofitted with new Split Scimitar winglets. 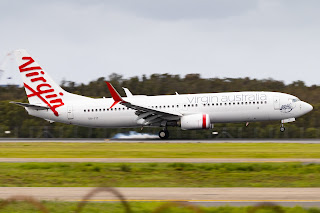 VH-YIT operated as VOZ605/608, flying to Mackay Airport from and then back to Brisbane - where it is pictured above.  It later also operated as VOZ1497/8 from Brisbane to Hamilton Island Airport and back.
VH-YIT is the fourth of possibly five Boeing B737-800s to be retrofitted with the new Split Scimitar winglets.  VH-YIT spent much of September at Hong Kong undergoing planned maintenance where it is believed they were fitted.  It returned to Australia at the start of the month but has been operating in Western Australia for much of October.

The three other of the five Boeing B737-800s to be retrofitted with the Split Scimitar winglets were VH-YIV, VH-YIR and VH-YIS - see Blog posts below.