QantasLink's recent announcement of new flights to Moranbah Aerodrome is being hailed widely as a win for the mining town. There are concerns however, that Mackay stands to lose as workers may bypass the area.

QantasLink is launching a new service between Townsville and Moranbah, and will offer another five return flights between Brisbane and Moranbah each week from the middle of October.

Isaac Regional Mayor Cedric Marshall has welcomed the new flights, particularly the new Saturday service from Brisbane, which he believes will be well utilised.

Mackay's Mayor, Col Meng, was glad to see the Moranbah community gain access to more flights, but raised concerns about cuts to flights into Mackay if bookings declined. He was also concerned competition with fly-in fly-out (FIFO) workers could reduce mining job opportunities for Mackay locals.

QantasLink has said the new flights were a response to customer demand for more services to and from mining centres in regional Queensland.

They have recently taken delivery of a new 74-seat Next Gen Dash-8-Q400 aircraft to service the additional Moranbah-Brisbane flights, which will operate on Saturdays, Sundays, Mondays, Thursdays and Fridays.

The new service between Townsville and Moranbah will initially operate twice a week, on Wednesdays and Fridays.

Meanwhile, the upgrade to Moranbah Aerodrome continues. The first stages are complete, with a new runway and tarmac now capable of handling the larger Dash-8-Q400 aircraft. 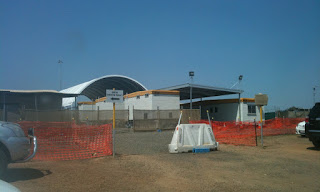 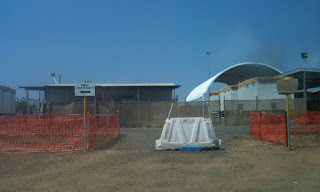 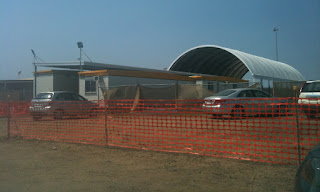 As shown above during a recent visit, work has started on the constructing the new terminal facilities.
Posted by Damian F at 6:00 PM