Flight Centric - which publishes airline and air travel news and features from around the world but with a specific focus on Australasia and Asia Pacific - has announced on Tuesday 4 October that Virgin Australia will commence double-daily week day services to Emerald Aerodrome with Skywest Airlines operated ATR-72s from mid-January 2012.

The proposed service is still subject to regulatory approval, but would be a most welcome addition for the residents of the Central Highlands and Coalfields, who have been long screaming out for competition and cheap airfares in the region.

A Virgin Australia representative said the ATR turbo-prop services would bring much needed competition to the region and would provide links to Virgin Australia’s domestic and international services as well as those of its partner airlines. 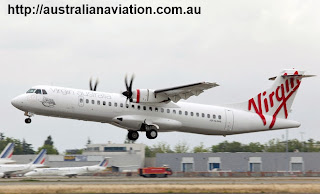 Exciting times ahead!
Posted by Damian F at 10:52 PM