The Emerald Airport was buzzing with excitement on Wednesday 27 October, as Virgin Australia's new ATR 72-500 aircraft - VH-FVL - touched down at Emerald Airport for the first time. 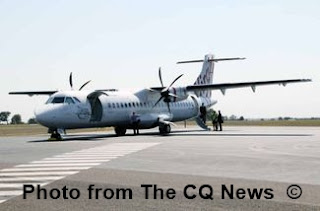 Passengers flying to and from Emerald will be able to experience the new planes themselves as of Monday 16 January, when Virgin Australia starts operating twice daily services between Emerald and Brisbane.

It was also announced that flights would start from just $88 one way.

Virgin Australia believes that the ATR 72-500 - a brand new 68 seat aircraft - is perfect for regional Queensland.

The Central Highlands Regional Council welcomed the arrival of Virgin Australia to Emerald, pointing out the historic significance of the day. "To have a new service and a new carrier is really good news for the town and we are now becoming a very significant regional airport", Deputy Mayor Councilor Paul Bell said.

Although the advancement is good news for Emerald, it does bring some pressure to bear for Council, with investigations underway on further expansion of the Airport.

With Virgin Australia's introduction to the market, there will be an increase in flights to and from Emerald by 572 per year, meaning there could be 1496 more people passing through the airport on a weekly basis.

Some of those priority areas for expansion will be the apron and an extension of the car park.
Posted by Damian F at 9:01 PM